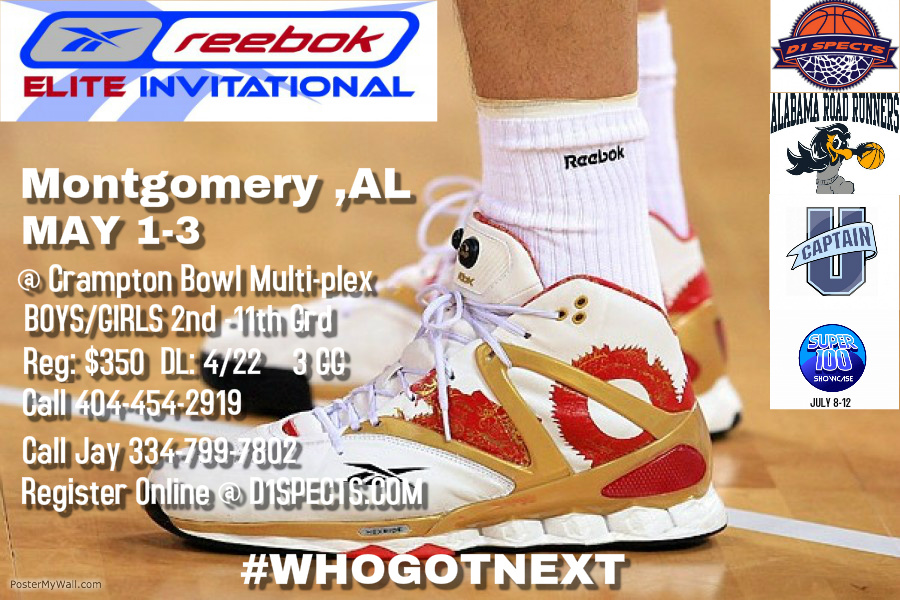 We would like to take this opportunity to welcome you to the 7th Reebok Elite Invitational . Here is some information that will help make you trip more enjoyable.

1. REGISTRATION: All teams must send a representative (NO PLAYERS) to pick up your tournament package at the gym of your first game. No coaches passes will be issued at any other gym.

Registration: Will be open from 6-10pm on Friday and 9am – 1pm on Saturday.AGAIN , TEAMS MUST PICK UP THERE PACKAGES AT . PLEASE DO NOT SHOW UP AT THE GYM WITH OUT YOUR CREDENTIALS. YOU WILL NOT BE ALLOWED TO PLAY!!!

2. ROSTER: Roster will be based on your certified roster. We will issue pre printed score sheets for your convenience. After the roster is turned in. No additions can be made to the roster.

3. GAME BALLS: Home team will provide Game balls for game play only. You may bring your own balls to warm up with.

4. SCHEDULE – Schedule will be posted on the D1spects website- no later than 8 pm this evening. Please do not call about the schedule. We will email you once it is completed.

6. Coachs Attire: Coaches must were either a Coaches shirt with a collar or Team t-shirt with team name on it. Shorts are acceptable. NO FLIP FLOPS.

7. GAME TIME is GAME TIME … 15 min grace period will be given. The team that is late will be penalized a point for every minute late. Clock will be running clock should the game start 15 minutes late.

Email: d1spects@yahoo.com . Please direct any concerns or schedule issues to our director.

Coaches will be given Three wrist bands at registration . Coaches names must be on the approved roster. Credentials can only be picked up at gym of your first game.

• Teams must provide their own warm up balls

• Home team sits to the left of scorers table

• Visitor teams sits to the right of scorers table

• Each team will warm up on the end opposite its bench

• Players foul out of the game on their 5th foul

• Two (2) timeouts per half-timeouts do not carry over

• Clock stops only on shooting fouls and timeouts

A full set of rules will be posted as we get closer to the start date.

NCAA Requirements for 15U-17U Boys & Girls Teams: All coaches of 15U-17U teams must have current NCAA coaching approval numbers and enter their team roster online with the NCAA. Click here to link the NCAA’s Coaches Approval site, and click here to enter your team’s roster on the NCAA BBCS site

17U / Varsity Divisions: The boys’ 17U & girls’ Varsity divisions are actually “open divisions,” where unsigned seniors with remaining high school eligibility can play. However, players cannot turn 20 before 9/1/2015. Unsigned seniors can play as long as they have not committed in writing to play for a college at any level. Unsigned prep school players are also eligible to play in our tournaments. If a player has signed a letter of intent and you think they won’t qualify because of grades, they still cannot play. The tournament management has the right to exclude any senior from playing. No player who has attended junior college or college may play in this event.